* Smart Growth Is About Appropriate Density:

In planning development, any one category should abut only the same or an adjacent category. The existing community is largely Category 3 (Suburban). However, the density of the proposed Metro site project falls into Category 5 or even Category 6, when considering DC type development. Based on Smart Code principles, the proper development for the site would be garden apartments not exceeding 40 feet in height, not a massive mid--rise apartment building more than 70 feet tall.

* Smart Growth is about Conservation of Environmental Resources: The EYA Plan would destroy the urban park on Eastern, an important green space for a community of adjacent apartment dwellers.

* Smart Growth is about Preserving and Enhancing Community: The EYA Plan would override an established community with a design and character that has stood for well over a century. Rather than build on this character with sensitive design and density, it rejects the community altogether. 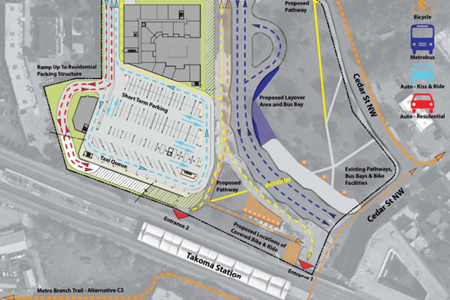 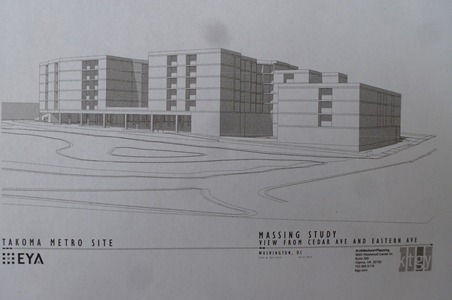 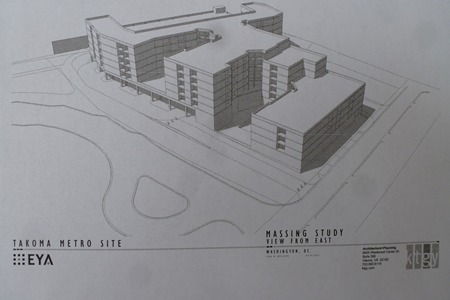 * Smart Growth Is About Effective Use of Efficient Transportation Systems: By reducing parking for Metro riders, the EYA plan discourages effective Metro use. Further, the plan makes no effort to improve the functioning of an outmoded Metro station, but locks in place poor bus-rail interface and poor handicap access.

* Smart Growth Is About Enhancing the Pedestrian System:

The EYA plan worsens pedestrian access to the Metro station, especially from Eastern Avenue, where circulation routes would now be blocked by a .massive apartment building.

Why the EYA Plan is NOT Smart Growth